View source
watch 01:33
Wiki Targeted (Entertainment)
Do you like this video?
Play Sound

A mental disorder or psychiatric disorder is a Mind mental or behavioral pattern or anomaly that causes Suffering distress or disability, and which is not developmentally or socially normative. Mental disorders are generally defined by a combination of how a person feels, acts, thinks, or perceives. This may be associated with particular regions or functions of the brain or rest of the nervous system, often in a social context. The recognition and understanding of mental health conditions have changed over time and across cultures and there are still variations in definition, assessment, and classification, although standard guideline criteria are widely used. In many cases, there appears to be a continuum between mental health and mental illness, making diagnosis complex.

Flippy has severe Post-Traumatic Stress Disorder (PTSD), which causes him to "flip" out and think he's back in the war whenever he's reminded of the war. When reminded, his pupils dilate, his irises becomes yellow-green, his voice goes from squeaky to a deeper, darker voice, and he becomes extremely violent, losing any shred of empathy he had and committing murder. Given the nature of this reminder, it's also possible that he has Dissociative Identity Disorder also known as Multiple Personality Disorder.

Lammy has schizophrenia since she always sees Mr. Pickels as a living creature while everyone else just sees him as an ordinary pickle. Therefore, Lammy is killing everyone herself, but since she denies the fact that she would ever harm someone, she uses her wild imagination to conjure up Mr. Pickels as the scapegoat for her crimes. However, it may just be possible that Mr. Pickels actually is alive and is the true murderer (as seen in Royal Flush). If not schizophrenic, Lammy may have some psychopathic tendencies considering that she clearly knows that Mr. Pickels is a serial killer but insists on carrying him around everywhere she goes.

Despite debatably being the result of a mental disorder himself, Mr. Pickels appears to be a psychopath, as he seems to kill Lammy's friends for fun, and also took pleasure in killing inanimate objects, such as a sockpuppet and a teddy bear. It is also theorized that he may kill other characters around Lammy out of fear that they may replace him as her best friend, so therefore disposes of them to ensure that.

The crack in Lammy's skull may be the cause of her schizophrenia.

Petunia has Obsessive compulsive disorder (OCD), specifically, mysophobia (fear of germs and disgusting things), causing her to excessively clean and wash things, even if it isn't her stuff. In Wishy Washy she clearly exhibits the severity of her disorder by constantly hyperventilating whenever anything was out of place, and more famously, her death in the episode: having being driven insane by the dirt covering her body and not being able to wash it off due to the broken plumbing system caused by Lumpy, Petunia proceeds to "clean" herself by cutting, shaving and slicing off her own fur and skin with a potato peeler, killing herself in the end and leaving her corpse to fall to the ground with a deranged smile.

However, even staying in the TV series, her OCD isn't always in existence, most notably, in Take a Hike, she drank very filthy, clearly contaminated water with no reservations, though she mainly did this because she was very thirsty and desperate.

Russell suffers from some kind of insanity disorder (possibly hysteria). This was revealed in Get Whale Soon. After being swallowed by a whale and accidentally killing Lumpy, Russell was driven mad; his eye turned grey, his mouth became crooked, and he started slashing things with his hook while laughing maniacally. This is further implied in Something Fishy, where he is shown to have a crack on his skull, similar to Lammy. Though to a much lesser extent, we see a bit of his insane state in Snow Place to Go while he's trying to escape the orca. 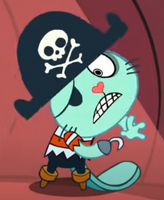 I guess he was dropped on his head and started saying "Yar" instead of the typical gibberish.

Flaky has a long list of phobias due to her constant anxiety and cowardice (and could be a phanophobe). She suffers from alektorophobia or ornithophobia (Chickens or birds; From A to Zoo), achluophobia/nyctophobia (darkness; Without a Hitch), necrophobia (dead things; Snow Place to Go), amaxophobia (driving; Easy Comb, Easy Go), aerophobia (flying; Wingin' It), acrophobia (heights and skiing; Mime to Five and Ski Ya, Wouldn't Wanna Be Ya!), musophobia (rats; Out of Sight, Out of Mime), coasterphobia (roller coasters; The Wrong Side of the Tracks), hydrophobia/aquaphobia (water; Wipe Out!), and Selachophobia (sharks; Wipe Out!). All these phobias reveal that Flaky is almost scared of everything. Strangely, in Take a Hike, she wasn't scared of a bird that fell out of its nest, but in From A to Zoo, she WAS scared of birds, as she bellowed in terror when one little chick was trying to hop over to her, though this could just be she is only afraid of chickens, not all birds. Flaky is also shown to go insane when trapped in unknown locations, as seen in Snow Place to Go where she is the only character to go insane from being left in the arctic long and in Without a Hitch, her fear made her commit a homicidal act towards Flippy, where she stabs him in the eye.

Nutty is shown to have a serious addiction to confectionery and other sugary foods. His care for candy often overshadows his care for his friends. This was evidenced in A Sucker for Love Part 1, where he stole Cub's giant lollipop and showed no sympathy for Cub, even when he was crying over his lost sweet. Also in A Sucker for Love Part 2, while he never actually does anything, he imagines himself killing Lumpy over a box of chocolates. This was also evidenced in Party Animal: When Flaky was experiencing an allergic reaction to peanuts, Nutty gets worried and proceeds to help. Unfortunately, he instantly becomes distracted by a platter of chocolate chips on the counter. Taking a while to decide what to do, Nutty ultimately pushes Flaky aside and chooses the chocolate over his poor friend. It is also revealed in Nuttin' Wrong with Candy that when he fails to get the candy he wants, his mouth starts to foam, which reveals that he has rabies. It is also shown in Party Animal that even the tiniest grain of sugar can make Nutty have a sugar rush and spin around rapidly like a tornado (similar to the Taz from "Looney Tunes"). Nutty is also shown that he can't think straight and he lacks common sense (possibly mentally challenged). This was shown in Chew Said a Mouthful; he broke his jaw after biting a jawbreaker, yet his still wanted to eat it, but it is either indestructible to eat it, or stone-harded, despite the condition of his mouth. His deaths are usually a comeuppance to his irrational behavior towards sweets.

It might be possible that he also has Attention Deficit Hyperactivity Disorder (ADHD), a disorder that prevents him from paying attention or staying/standing still and imagines lots of candy in floor but that is colored objects. This latter illness has been touched upon most prominently in A Sight for Sore Eyes, where it seemed to have psychically affected his vision as well.

Lifty and Shifty have kleptomania, the inability to refrain from the urge to steal items and is done for reasons other than personal use or financial gain. Because Lifty and Shifty have this disorder, they are always trying to steal at any moment possible. They steal whenever they can, and are seen stealing in almost every episode they're in.

It was debated whether or not Lifty and Shifty actually steal out of need judging by their poor living conditions seen in episodes like Meat Me for Lunch and Buns of Steal. However, in 2015, it was confirmed by Kenn Navarro that they are indeed kleptomaniacs.

At least towards Sniffles, all four members of the Ant Family appear to be sadistic, meaning that most of their pleasure comes from others' pain and/or suffering. This is shown not only through how they brutally torture Sniffles in every episode they appear but they are always shown to enjoy doing so through smiles and even cheers.

It is possible that Handy is a sociopath, as he rarely shows any grief or sympathy when other characters (apart from Petunia and The Mole) die or get injured. At times, most notably in The Wrong Side of the Tracks and Something Fishy, he even laughs or celebrates these casualties. As shown in In a Jam, he also suffers from epileptic seizures. 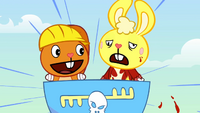 Handy teases Cuddles after he loses his hands and is dying of blood loss.

Handy is happy to have survived, giving little concern to the deaths of his friends. 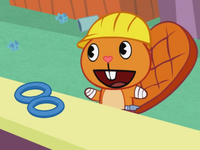 Handy's reaction after seeing Nutty die in front of him.

Disco Bear appears to be a narcissist which means that he has an obsessive love for himself and inability to see his own flaws. He is constantly seen checking out and praising himself and also seems completely unaware of Giggles and Petunia's hatred of him which is another sign of the disorder. However, in Ipso Fatso, he clearly (and finally) noticed that he has a problem with his weight which is unusual for the disorder.

Mime may possibly have schizophrenia as he often owns invisible furniture. In Easy For You to Sleigh, he was shocked to see his invisible safe “stolen”. Minor hints of Mime actually having schizophrenia are: him not noticing that his case has been shattered and not escaping Giant Lumpy when he clearly has the chance to in Dunce Upon a Time, and pulling out a dead imaginary Sniffles as opposed to the real one when he was drowning in Mime to Five.

Mime stills thinks he's in a glass jar, despite it clearly being shattered,

Mime apparently believes that what he is miming is actually real.
Community content is available under CC-BY-SA unless otherwise noted.
Advertisement