Breakfast is a great way to start this episode. I mean the day.

Breakfast in the cornfield.

...it's for his corn.
This reminds me of someone's love for chocolate.

Where did he get a bib that size?

He has deep feelings for it.

And dislikes when anyone tries eating it.

"It's okay. The mean birdie is gone."

Lumpy heads back inside, confident that his corn is safe.

He gets breakfast for himself.

"So this is the only food I can eat."

The zoom in on the moldy bread.

Aww... Isn't it cute? It shows when the corn was born and it riding on a pram!

The corn riding the tricycle and having fun with its "dad". 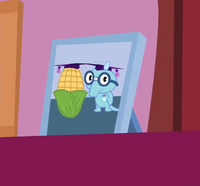 The corn cob accomplished what Lumpy never could.

Just as Lumpy swallowed the bread...

We interrupt this heartfelt moment for more crows!

Lumpy clearly yells "Hey, get out of there!".

How dare those crows?! (Those hands though.)

"It's alright... I will always care about you."

Glaring angrily at the crow.

Lumpy thinks of what to do.

An even older phone than most episodes.

It's even scarier when it moves.

Time to plant it.

Is that the right place to plant that thing?

Cuddles stops in front of the tracks.

"The barrier's not closing?"

Cuddles checks for a train.

Checking the other side.

Not a train in sight.

He was THIS close to dying the way Lifty and Shifty did in another episode.

No reason for Cuddles to leap out of his vehicle except to die.

A little too early.

Dibs on the right half!
Death: Cuddles

It kinda worked. That crow's scared.

The crow flies into its home.

Only to cause property damage (and set up Toothy's death).

Now the crow's invading his house.

Now it's even more scared!

Seriously, this is way scarier than that scarecrow. 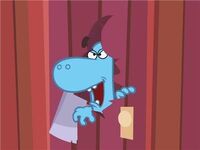 This is the part where you scream.

One last attempt to chop the crow.

Lumpy destroys his home in a psychotic rage.

Lumpy realizes what he did.

So, he orders a blanket.

They should stop sending people to make deliveries to him.

This electric blanket will keep him warm for sure.

The hive lands in front of Toothy.

Told ya they should stop delivering to Lumpy!

At least they're not stinging your eye.

Toothy looks positive all of a sudden.

Toothy leaps into the pond, forgetting an important expression.

Look before you leap.

Your struggling is making it worse.

What a way to go. We would make a pun, but the show already did.
Death: Toothy

Looks like Lumpy put that blanket to good use.

"Now where is that scarecrow?"

Lumpy finds a new scarecrow (that could scare more than just crows).

I seriously doubt that would keep him warm.

The fair! Nothing bad ever happens here.

I don't think Mime has ever won in these contests. Neither has Nutty with his partially-eaten candy apples. Sniffles was disqualified because his atomic carrot is inedible.

We have a winner!

"Take it easy, my little champion."

And we all know what happens when corn gets hot.

The only injury Lumpy receives in this episode. Still pretty brutal-looking though.

Lumpy worries as his corn begins to pop.

Disco Bear is happy to kiss Giggles, unaware that she just died.

The closest he'll ever get to kissing a girl.

And dat face during death.

His lips haven't touched anyone yet.
Death: Disco Bear

It's not over yet.

How did she even wind up with this job?

Um, Flaky, it's the contestants that are supposed to get their head in the game.
Death: Flaky

The Mole of all people successfully hits the target.

At least he did something correctly. Too bad he died seconds later.

He probably died with a smile, but we'll never know.
Death: The Mole

Reduced to a burning cob.

Sniffles and Mime: See no evil, speak no evil.

All of them died the same way: missing head and arms.
Death: Nutty, Mime, Sniffles

Giggles died with a smile though.
Death: Shifty, Lifty

How did the fires start?
Death: Russell, Handy, Petunia

Wow! Were there any survivors?
Death: Pop, Cub

Of course, Lumpy's the only survivor (unless you count the three characters who didn't appear).

What was once Lumpy's blue ribbon-winning corn is now a barren cob.

Lumpy isn't taking it so well.

Lumpy's beloved vegetable may be gone...

...but at least it made great popcorn.

Lumpy hides the giant popcorn for himself. Possibly to bring to a movie theater.

Someone else comes to collect the spoils. 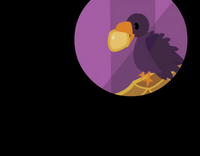 I assume that kernel popped inside the bird's mouth and killed it afterwards.

The carnival before its destruction.

The carnival after its destruction.

The vegetable/fruit competition.
Retrieved from "https://happytreefriends.fandom.com/wiki/Aw,_Shucks!/Gallery?oldid=363093"
Community content is available under CC-BY-SA unless otherwise noted.