In Happy Tree Friends there are different advertisements, involving different Characters and how they are played out, which is, in some way, based around what they are linked to. 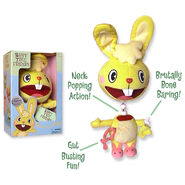 An example of a HTF toy.
Retrieved from "https://happytreefriends.fandom.com/wiki/Advertisements?oldid=290832"
Community content is available under CC-BY-SA unless otherwise noted.