Start a Wiki
watch 01:48
The Loop (TV)
Do you like this video?
Overview
Gallery

Images of every sign of intelligence from the characters.

Petunia is slow to react.

Flippy really should have done this sooner.

Signs are obeyed for a good reason.

It's probably a good idea to stick your hand into a blender while it's turned off.

If only Disco Bear checked for glass the second time.

At least he has cleaned up a little after Handy's death.

Russell and Lumpy preparing to start a fire.

Pop knows what to do, but doesn't know what caused the power outage.

If Flippy is agitated, you better leave.

The perfect way to protect yourself from kryptonut.

What do you do with a patient who's too stupid to accept his treatment? Make it impossible for him to get rid of it.

Too bad they didn't expect Splendid to use binoculars later.

Only problem with a candy cane trap is that they can be melted away with saliva.

Pop is too busy to keep Cub out of trouble... or in his case safety, so he hires a babysitter.

Yes, milking the cow was a good idea, but a skinny cow is worthless.

This doesn't work until after he's dead.

Any brakes necessary to stop the machine would be good.

"No fire near the gas station!"

The flare actually passes the ship, the wind probably pushed it back.

See boys, there are ways to make money without stealing.

This would be the right thing to do with an open wound like this.

Heat melts snow, just not in this show. (Hey, that rhymed!)

Just had to be sure that we are indeed stuck in a whale.

He learned from his last experience with bees.

Handy healing his swelled up face.

Who needs beans when you can fish?

At least she knows the basics of driving.

Pop acts quickly to stop the machine from spinning.

Cuddles, you might want to get down, just a little.

He was doing just fine until those dang kids showed up.

What else would you do with mindless slaves who can do chores?

This is what I do with my walnuts. (They wear tiny builder hats too)

The wider the lens, the more powerful his heat vision becomes.

It would be better if Russell were to come a little bit closer to the hole before casting the hook.

It was his only way to save her.

Always wash your hands before you work with patients.

This would normally be the right thing to do, just not if you have superpowers.

It takes a damn talent to make donuts out of moose flesh.

How else would he leave his car?

Everyone else flew away while Flaky was safe behind that fence.

Even Lumpy knows that light and developing pictures don't mix.

The water should be just fine now.

If only he had a chance to put the fire out.

That's one smart baby if you ask me.

Not too many characters are smart enough to do this.

He found a way to carry his friends on this narrow bridge!

Anyone else think it's weird seeing Lumpy be the patient instead of the doctor?

Who ever thought these two could be so generous?

Lumpy would have helped, had he not seen what the nest looked like.

This is for your own good, Nutty.

Not the best method, but his heart's in the right place.

"In case of emergency, breathe into this mask."

He knows where to go, but Pop doesn't understand.

Everything seems to be at its place for now... That is, until HTF logic kills that baby bird just a few seconds later.

Too bad Flippy pops it.

If only he watched where he spat.

How the military sharpens their pencils.

Good thing she didn't ignore his injury like that other time.

Pop is sleeping, while Cub is working.

Toothy should get a raise. 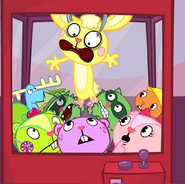 Let's just hope his aim is better than his vision.

Maybe Flaky was destined to become a pilot one day.

It was the only way she could've saved herself from the avalanche.

It's a miracle that he was able to heal this.

Never mind, this is more impressive.

Lumpy finds the cause of Disco Bear's heart attack.

This won't work, but nice try.

That's one way to boil crab.

The smartest thing he did in this episode.

That was too close.

A good parent keeps his child away from any danger.

How cavemen escaped from predators back in the day.

Not his fault the rope was too long.

Technically, it's a hamster she's saving, but it counts.

What other choice did he have?

"There's a drill in the ground, you need to run!"

Handy doesn't waste time, he instantly gets to work.

Lumpy saves himself from suffocating.

Lumpy saves himself from suffocating, part 2.

It's not easy to pull this off.

That's one out of four seatbelts.

He uses his "head" instead of trying to use his nubs for once.

He saved Cub from the truck, but not from Lumpy.

Well, Splendid saved her in time. Now, if only he watched where he was going.

Too bad there was nobody out there to catch him.

"Thank God you're okay, now get back to work!"

Pop dives in to save Cub.

It would have taken longer to kill all of the zombies with a chainsaw.

Yes, their plan worked, but how would this go down if they were dealing with a competent police officer?

It either takes you to be a damn professional to escape from those sharks, or just pure luck.

Everyone was so focused on Giggles' death to notice that Mole has picked a can as well.

Who would expect an episode where The Mole is seen driving and doesn't crash into anything?

It's official, Cub is better at surviving while Pop is not around.

Yes, Lumpy was a douche, but you didn't have to kill him. Then again, he'd probably lose if he lived, so....

Fliqpy is just as smart as a zombie as when he's alive.

A dick move, yes, traitorous, yes, but it did save Shifty's life.

In both life and death, Toothy made Lumpy money.

He's only doing this for his pages, not the characters.

Lumpy destroys a whole tree for a toothpick.

This was their idea.

"Dumb clerk will never know about this."

"Now no one will ever know."

Shifty knows how to stop Splendid.

Wow, Lifty and Shifty were able to steal and nobody is on their tails.

Killing people as a trike is no different than killing as a bear.

Mime mooches off the candy that other people trick-or-treated for.

He's a heavy sleeper, but tying him down in case he woke up was a good idea.

How Did You Do That/Know That Would Work?

One of the most impressive things anyone on this show has ever done.

One of the most impressive things anyone on this show has ever done, part 2.

Lumpy has killed so many characters that he can teach anatomy.

There must be cocaine in that lemonade in order for there to be that much cash.

I wonder if Flippy could pull this off.

He only saw Whistle attack twice and was able to figure this out.

That's one way to kill zombies.

How did Lumpy develop images from flesh?

Who knew Lumpy's antlers could be used to steer wheelchairs away from obstacles?

How does the character obsessed with science and math lose to the guy who confuses small objects for candy?

He couldn't do this with a car or motorcycle.

The Mole's a badass.

Lumpy knows how much gunpowder to use.

Apparently, forcing it back in place solves the problem. No surgery required.

In the end, all he had to do was overdose on some pills to cure his PTSD.

I thought that coal and diamond thing was a myth.

He did this with one single mousetrap.

That's one way to use your nubs.

He randomly pulled on the switches and got to the right height.

Shifty got this idea from a movie he once watched.

Anything for his precious bread.

The result of years of love and dedication.

That's one way to use your tail.

Lumpy should teach Sniffles a thing or two about creating things that don't backfire on you.

Who thought one bolt would make such a difference?

Looks like Cuddles is also good at building small vehicles.

Sniffles just loves to use science on the most basic activities.

To be fair, this plan would've worked if that outlet didn't happen to be there.

Russell is so resourceful.

Neat invention, but where do the extra rocks come from?

Dang, way to recycle parts, but wouldn't a ship be better?

He sure put in a lot of effort for his milk.

Not bad for a beaver with no hands.

They could've organized the bolts on this thing better.

If you can't buy a pet, just make one!

Where did Pop learn how to use robots to revive others?

The only smart thing about any of this is the fact that Sniffles could build that thing.

Who wouldn't want a machine that records your dreams?

Sheesh, how long did it take him to bury all of the bodies?

Handy preparing to get the work done.

He fixed the bridge all by himself.

Handy is the only character who put out any fire in that episode.

On their way to stop Fliqpy.

This is Russell's new pirate ship.

It took them days to do this and they don't even look like they broke a sweat when they're done.

Look On the Bright Side

You have a giant bulge in your chest, the heart takes up like two-thirds of your body, and you may never walk again, but at least you're alive.

You can't breathe, but he did put the fire out.

Your bathroom is a mess, but he did fix the problem you caused.

You lost an arm, but hey, at least you're not bleeding anymore.

Your lives are ruined, but Lumpy revived you both.

Only one leg left to be finally free! :D

Is Fliqpy doing this because he was assigned to or is he just insane?

Did Fliqpy let Cub live on purpose or does he intend on killing him later?

It is unknown if she ducked to avoid meeting the same fate Flaky did, or if she survived by sheer luck.

It is unknown if he did this on purpose, or if his mental state caused him to swing his hook around.

Handy could've gotten help from somebody to get out of that hole.

Did Fliqpy let Handy live on purpose, or did he think rendering Handy immobile is worse?
Retrieved from "https://happytreefriends.fandom.com/wiki/Acts_of_Intelligence_by_Character/Gallery?oldid=345449"
Community content is available under CC-BY-SA unless otherwise noted.