Images from the TV episode A Sight for Sore Eyes.

You need to take in this rare sight; The Mole isn't killing anyone or breaking anything.

Note: This paper is upside-down.

What kind of animal has an eye like that on the wall?

Waiting room boredom, we all know how Russell feels.

Who knew kites were so interesting?

Russell became interested in kites ever since he crashed his pirate ship (no prize for guessing why).

Maybe he's at the optometrist for a reason.

This isn't gonna work, is it?

"Can the doctor just hurry up?"

Dr. Lumpy is ready to see you now.

If he can get through the door.

Who designed this door?

Okay, just turn to the side.

Doesn't Russell know Lumpy well enough to not be so happy?

Lumpy getting his hands all nice and clean.

He knows the sanitation rules.

Did Cro-Marmot forget to refill them again?

This is the point where you run.

Is this a radioactive trash can?

Or maybe it's a recycling bin.

That's not a glove.

Russell must be really desperate...

Sniffles' house from the outside.

Onto a new plot.

Toothy happy at his paper airplane.

Paper airplanes are a thing of the past.

Metal airplanes are the future.

Damaged paper airplane on the floor.

You didn't think we forgot about him did you?

The Mole's house is haunted.

Better get rid of the haunted bulb.

How The Mole got a driver's license is one of the shows' greatest mysteries.

When you're a pirate, you only need one contact lens.

But who's going to use the other one?

"Hey Russell, aren't you a righty?"

Why you should never put your contact on with a hook for a hand.

I think I know why Russell only has one eye.

"Yay, I did it without piercing my eye!"

This episode jumps around a lot.

Did I say dream earlier?

Watch out for that open drawer door.

Russell likes kites, if you didn't catch that earlier.

Russell's kite blowing in the breeze.

He doesn't seem to mind.

Hey, get back to your job!

Does Russell not notice the nutcase chasing him?

Sniffles finishes his appointment with the eye doctor.

Sniffles stares at your soul.

Just move along. Nothing to see here.

Hey, these aren't Sniffles' glasses! They only have one lens.

Sniffles has no idea what that thing headed right for him is. So naturally he stands still and tries to identify it.

Goof #7: Sniffles' vision is clear without his glasses.

Plotlines about to collide.

I guess it was too good to last.

The Mole somehow survived the crash without an airbag.

I guess The Mole didn't kill him.

Nowhere to be in a hurry? Try a seeing-eye tortoise or even snail. Or a fish if you live underwater.

Pets of a more cuddly variety.

Why does that dog look familiar?

"Won't be needing this anymore!"

Lumpy breaks The Mole's cane in half.

It's a miracle! Russell has to bump into the Mole to fix his hand!

I guess all the plots take "collide" literally.

Sniffles' plane flies by to distract the puppy.

What are you so scared of?

Russell helping The Mole up.

Handy should stop breaking the fourth wall and duck.

Was Handy's hardhat made of rubber or something?

The Mole steps in something.

Another one of The Mole's mistakes...

Cuddles about to throw up.

That has got to hurt.

Apparently, this is what you see when your eyeballs get cut off.

Why does everyone keep bumping into Russell?

The plane collides with the kite...

...and spins around Nutty while wrapping him in the string.

This has also gotta hurt.

What a mess.
Death: Nutty

There was no room for a subplot of The Mole shopping. Maybe next time.

And that's not a light bulb.

But he didn't listen.

Or you'll end up like him.
Death: The Mole

The lawn mower can be a dog if it wants to.

Panoramic view of The Mole's house.

Watch to see how The Mole "reads" his paper. 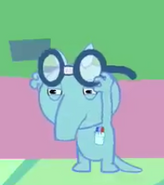 Sniffles without his glasses.
Retrieved from "https://happytreefriends.fandom.com/wiki/A_Sight_for_Sore_Eyes/Gallery?oldid=320006"
Community content is available under CC-BY-SA unless otherwise noted.