Images from the TV episode A Change of Heart.

In case you didn't know what an orange hand looks like.

Into the jukebox coin slot.

Dancing to his own produced music, I suppose?

Petunia is not amused.

Never one to pass "an opportunity".

Disco Bear can materialize hearts to fly into people.

Do you blame her?

"I have a boyfriend, two in fact."

He does love his food though.

Playing with your food, huh?

Did he even chew?

Even Cub doesn't play with his food this way.

Egg on your face.

Truffles wouldn't approve of this mustache.

A stick of butter.

He may not have toast, but he can improvise.

Butter on a stick (really a chicken bone).

It's made of milk, it must be healthy, right?

Careful not to fry your hand, like Lumpy does in a later episode.

One health hazard on a stick.

Sure, toss your bone on the floor.

I thought you needed a heart to have a heart attack.

"What a drama queen."

Can't even be serious while having a heart attack.

You know it's bad when Petunia of all people (skunks) worries about Disco Bear.

Lumpy is working on a patient.

The operation was a complete success.

But Lumpy needs a toaster.

This calls for a snack.

This bike will actually come in pretty handy.

Giggles with the patient.

The doctor is in!

Anesthesia, amnesia, whatever you wanna call it.

You're looking at a professional doctor at work.

Lumpy manages to open Disco Bear's ribcage, but slips while he's at it.

Now to locate the heart.

Fun fact: Hearts deflate if you don't take care of them.

Good thing this bike is around.

I don't know if this would work in real life.

"What the heck is this gonna do."

But it does in HTF!

Lumpy searches for a new heart.

Those organs are useless now that you've thrown them on the floor.

'This sandwich seems good to me."

Lumpy gets an urgent phone call.

Lumpy arrives to see the carnage.

Handy's death after a plane crash.

I don't know if a beaver heart will function for a bear.

Lumpy tries to pick it up.

That soccer ball tells me he's on a soccer field.

Cuddles slides in and steals the heart right under Lumpy's nose.

"Hey, get back here with my heart!"

The goal is just up ahead.

You've got this, Lumpy.

Fun fact: Lumpy was once a champion soccer player.

What remains of Handy's heart.

Lumpy realizes he got carried away.

Back in the operation room.

Lumpy is either sad because of losing that heart, or he bought those soccer shoes and doesn't know what to do with them.

And now Handy's corpse is gone.

Cycling is good for the heart.

"Go away you stupid gulls."

"You're rats with wings!"

But only his bike comes out.

The whale heart gets stuck in the tunnel.

Lumpy tries to move it.

He hears a truck again.

Something tells me the truck driver is blind. So The Mole isn't alone.

Lumpy is running on a whale heart.

Lumpy is stuck in his own bike.

The truck steals the heart.

Lumpy arrives at a butcher's.

What's Nutty doing in a butcher shop? I guess even he needs a break from sweets. Or he'll end up like Disco Bear.

What number did you get?

It seems it's a big one.

Lumpy, on the other hand, has gotten some sleep.

I'll take that heart to go.

...but his hunger prevails.

Lumpy finally returns. And guess which of the meats he's eating.

Giggles is passed out.

And Disco Bear is probably dead.

I think you should call someone else to take over for her.

Lumpy has recovered the burger he dropped on the floor.

There are ribs in there.

More steak, this one has a T-bone.

It's not even cooked.

Lumpy realizes he ate the heart instead of a piece of meat.

But he keeps eating it anyway.

A crash is heard from outside.

Lumpy reacts to the crash.

I would use the hearts of one of the drivers.

See Lumpy on the newspaper?

That probably should have killed him. 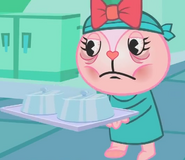 Lumpy really needs to give her some rest.

Thought Disco Bear was a creep before?

That burger's not for you!

Now Lumpy's the one with a broken heart.

Lumpy trying to finish his meal, despite his heart attack.
Death: Lumpy (Debatable, offscreen)
Retrieved from "https://happytreefriends.fandom.com/wiki/A_Change_of_Heart/Gallery?oldid=342527"
Community content is available under CC-BY-SA unless otherwise noted.